Folkish, Tribalist, group centered on learning about the heritage, traditions, and faiths of our ancestors of European decent.

Experts dug up not one, but two corpses buried with their longboats in a grave dating back more than 1,000 years.

In a strange turn of events, they later realised that the pair died nearly 100 years apart.

The top ship, containing the skeleton of a noble woman surrounded by lavish jewellery, dated to the late 9th Century.

The bottom one held the remains of a man buried some time in the 8th Century.

Scientists said Viking tribesmen likely dug up the man and his larger longboat, before carefully placing the second longboat and woman inside.

A team from the Norwegian University of Science and Technology dug up the strange find on a farm in Vinjeøra, central Norway.

“I had heard about several boat graves being buried in one burial mound, but never about a boat that had been buried in another boat,” said lead archaeologist Raymond Sauvage.

“I have since learned that a few double boat graves were found in the 1950s, at Tjølling, in the south of the Norwegian county of Vestfold.

“Still, this is essentially an unknown phenomenon.” 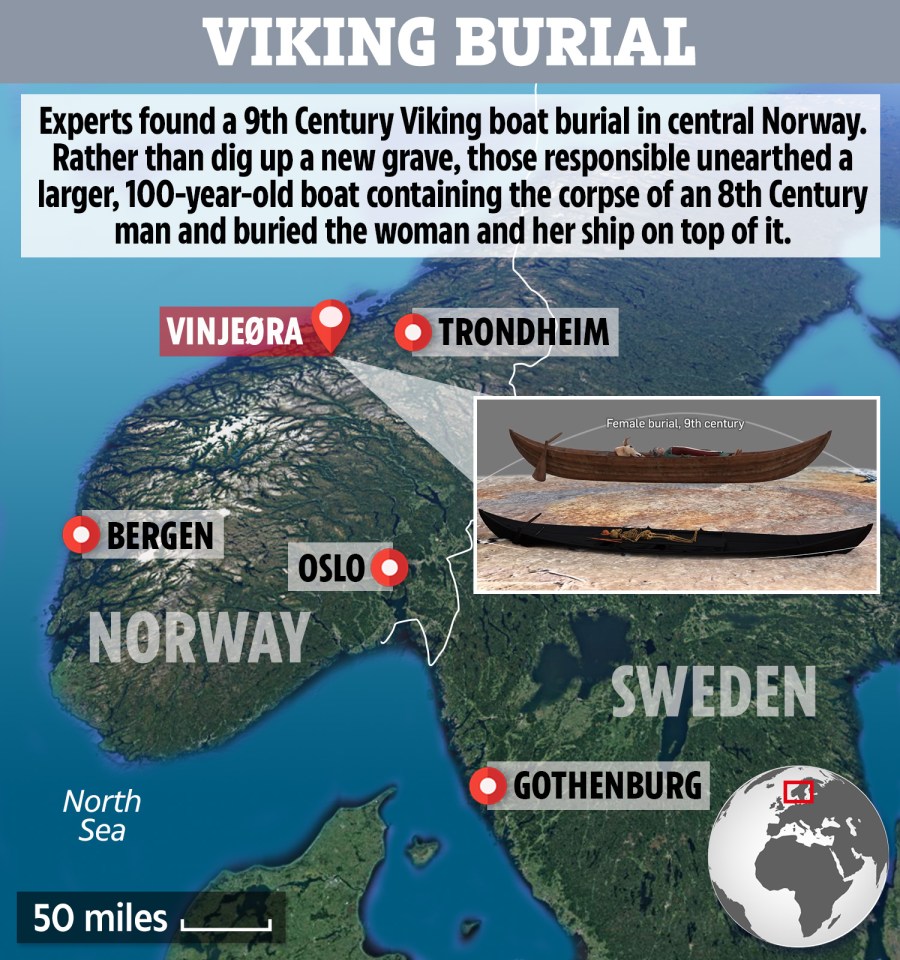 The 9th Century woman was clearly someone of importance, based on the goods found scattered within her 26ft ship.

She was carefully dressed in fine clothes and arrayed with gilded bronze brooches, a pearl necklace, and even a cow’s head.

Her vessel was placed neatly and carefully inside the larger 33-foot boat, right on top of the 8th Century man’s remains.

Not much of the wood from each boat was left, and most of the human remains had rotted away.

brief history of the Vikings

Here’s what you need to know…

However, some key items were left behind, including the metal studs used to build each boat, and a horde of metal weapons buried with the main.

Some skull fragments from the woman were still intact, and scientists said they planned to study the remains further to find out who she was.

“Hopefully, we hope we will be able to get some DNA from the skull to provides us with more information, such as what she looked like,” Mr Sauvage said.

Of particular interest was a cross-shaped brooch discovered in the woman’s grave.

It was made in Ireland, suggesting she was somehow involved in raids across the ocean, a key part of Viking warrior culture at the time.

“It was common among the Vikings to split up decorative harness fittings and reuse them as jewellery,” said Aina Heen Pettersen, a historian at NTNU.

“Several fastenings on the back of this brooch were preserved, and were used to attach leather straps to the harness.

“The new Norse owners attached a pin to one of the fastenings so it could be used as a brooch.

This brooch buried with the woman was made in Ireland, suggesting she took part in Viking raids across the North Sea[/caption]

“Using artefacts from Viking raids as jewellery signalled a clear difference between you and the rest of the community, because you were part of the group that took part in the voyages.”

None of the man’s skeleton remained, but experts were able to figure out someone was buried with the larger boat based on the grave goods.

A sword, shield and spear were found in the boat, and the sword was in an 8th Century style.

Along with the fact there were two longboats, this meant the goods were unlikely to have belonged to the woman.

An archaeologist at work at the site[/caption]

It’s unclear why the pair were buried together, but experts suspect they were related.

“It’s reasonable to think that the two were buried together to mark the family’s ownership to the farm,” Mr Sauvage said.

He added such burials were important in a society “that for the most part didn’t write things down”.

Work on the remains continues.

Who is the Goddess Holda?

View all posts by Jeff →